2.After you pay, please contact with our online support , we will arrange a face to face trade with you in game.

3.If you any questions, you can see the FAQ first. If your questions are not included in FAQ page, you can contact us by any way listing on the site.

Comparison:
With all the games I have played recently it would be hard to compare this game with anyone I have played. The only imaginable F2P game that comes close would have to be Hero Online and that isn¡®t doing any favors toKal Online. This game consist of the best graphics of any F2P game to date. And they are always adding something new to the game, it contains all the aspect that make MMO¡®s so popular pvp and pk. The story behind this game is an ancient story unlike most MMO¡®s. Its based on a Korean legend of Ban-go and his troops, you take the roll of an Knight strong and ready for battle hack and slash complete quest, but there are actually two seperate quest. One is the normal quest that will grant you exp or items and gold. Or there is the story line quest that will grant you job changes and exp as well. Another character you can take the roll of is the Archer who has the ability to kill a target before getting to her, did i just say her yes this is a female character. The story behind this is that all the male archers where killed in the first war with Ban-go. And the third and final character you can play is the Mage also a female and similar story with the archers.

First impression:
This game had me from the moment I killed my first Demon Vulgar (anyone who has played Kal Online Geons will know what they are). At first the leveling really took off gaining a level every hour or half an hour. With weapon and Armour upgrades G40 in both cases at the level till 35 where you get actually the next grade in Armour. This game if you follow the quest and storyline quest is great and keeps you involved. The new skills keep you wanting to get to the next step to gain a new way to defeat the demons. Its a comprehensive skill tree if you get a skill and find out later you didn¡®t need the skill you will need to obtain a stone of skill to eliminate the skill. You also get attribute points with each level 5 to place anywhere you feel your character needs them. Mostly Strength and Health for Knights, Agility, Strength, Health for Archers, Health, Intelligence, and Wisdom for Mages.

Graphics (9)
This game is complete excellent scenery and mobs, the model details half the time make you forget you are actually playing a MMO. From the monsters to the trees I never had a problem with lag or glitches in the game. But beware if you head into any busy town you will experience lag from the countless shops. Also a added bonus to the game if you change settings in your Kal Online Geons folder and you behead a monster his head will actually come off restoring some mana and health.

Sound (7.5)
Turn off the game BMG and leave the sound effects on monster growl or cry when they die and while you are fighting them. It has the similar Korean game bmg which is not very popular with any MMO gamer.

Gameplay (9)
The game is actually very fun to play, considering all the skills you can obtain after you level your character. Only downfall of the game that I have come in contact with is the grind. After you hit level 50 ( I have a level 53 Expert Archer in the game). After you accomplish your higher levels the game play becomes better. You can join a guild and fight for control of the castle that will get you even more gold. Yes thats right you get to collect taxes and increase your wealth. Wich you can do with the aid of cannons.

Community (7.5)
There are a lot of good reaction to other players in the game, yes you do get the occasional noob comment and maybe a few unatural comments but overall the community is friendly and a lot are willing to help you out. Join a guild and gain an alliance your community contacts take off, you will be chatting with a lot of players. One of the biggest things with this game is its ability to form guilds and make alliances to go after the castle. The community is fair and if you just take your time and level you will eventually gain friendships with a lot of the players.

Value (8.5)
I played this game for a year i would of scored it higher, but after a while the game to me got boring, so I moved on. This game has excellent replay value, you gain new jobs and take on the doggiebie lord or even go to the Advanced Deamon base and try to take on the queen. With additional content being added this game will be one that all players can enjoy. Even if sometimes you have to take a break from it.

Unique features (9):
This game allows you to move your character to more powerful positions. Castle Seiges and advanced skill tree make this game a unique game. Also the Storyline and the overall story in the game will keep you wanting to read more and more of the story. This game has and will be one of my favorites no matter what game will try and challenge it.

Personal rating: 10
This game introduced me to MMO¡®s the way they should all be, taken time in graphic models and terrain, this game should be a game most MMO¡®s should be compared to.

Overall rating: 9
This game has a market to everyone, the stunning graphics reserved for games such as WOW and Guild Wars, yet on the F2P for people who feel a game isn¡®t worth there hard earned money. From the young to old this game will fit any MMO gamer and will continue to do that until some bigger better game comes along and knocks it off its rank. 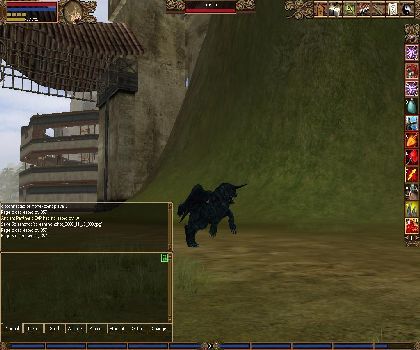